How to Make Love to a Woman

Well, I'm sure that title got your attention! But, no, this is not a blog entry on pick up lines or scented oils! This is an announcement and an invitation to everyone interested in seeing Dog & Rooster Production's latest feature film! 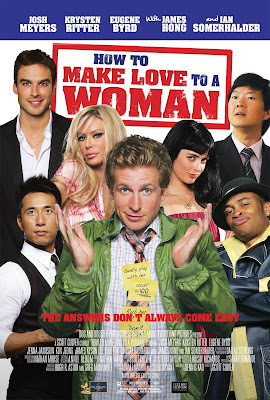 I executive produced this film last year, and it will out this summer. But it has it's LA premier this week, and I would love for all of you to attend! It's a romantic comedy about, well, how to make love to a woman! It was a script my producing partner, Sheri Bryant, fell in love with a few years back, and we are so excited to finally have it hit the big screen. We have a stellar cast, including Josh Meyers (That '70s Show) Krysten Ritter (She's Out of My League) Ian Somerhalder (The Vampire Diaries) Eugene Byrd (Bones) James Kyson Lee (Heroes) Ken Jeong (The Hangover

) James Hong ( Balls of Fury, and of course, Blade Runner and Big Trouble in Little China!) and Jenna Jameson (Yeah, the REAL Jenna Jameson!)
We also amassed a killer soundtrack, with many of the bands actually appearing in the film! It was great to hang out with all of them and watch them perform. The line up includes Yellowcard

, just to name a few!
Watch the trailer here:

Our movie is the "kick off film" for their Los Angeles United Film Festival, Thursday, April 29th, at 7:00pm. It will screen at the Los Feliz 3 Cinemas. Click here for additional details!
Hope to see you all there!
And I apologize for not updating my blog more this month. I have been extremely busy on Legend of Neil, season 3! I can't wait to tell you all about it! I have had the opportunity to get some new blog videos shot, including one with James Kyson Lee, and another with the beautiful America Young! As soon as we wrap next week, I am going to get in the editing room and have those ready to upload.
Gotta go! We are filming today!
Posted by Greg Aronowitz at 11:55 AM