Some people spend the whole year looking forward to Christmas. Others get excited when its their birthday. Many eagerly await spring break. I have to admit that one of my favorite times of the year would be San Diego Comic-Con. If you are a comic book fan, and haven’t been, you MUST make it a mission to get there one year. Well, actually, COMIC BOOK fan is kind of a limiting, old school classification of attendees. These days, I would safely bet that at least 40% of the people on the floor have never even held a comic book! The modern comicon is much more entertainment oriented, movie studios and networks having huge installations that overshadow the indie comic publisher booths. One out of every ten shoulders you bump into will be a celebrity, and every artist who has ever put a pencil to paper can be found displaying mind-blowing works. It’s worth the trip!

The show started on Wednesday, the 21st, and ended Sunday, the 25th. I had the good fortune of having to be there for the whole thing. I mean, I HAD to, it was work! J As fun as the work was, it was exhausting, though. The hardest part was having meetings scheduled back to back, and realizing that I would need to navigate my way through a crowd of 120,000 people to get from one meeting to the next with no travel time scheduled! I’ll plan that differently next year. I thought I would be con’d out this morning, but I found myself very inspired by the weekend’s events, and revved up for next year already! I started tweeting my highlights and fails, and realized I have so many I should blog about them. I titled this entry “Pros and (Comic)cons", but I think I will stick with the highlight/fail assignment, as there were no real cons to the con!

SDCC highlight #1: C’mon, you would pick this one, too! I saw a lot of cool things and met tons of cool people, but I am quite certain that the memory I will cherish the most from this con was being back stage with Felicia, Sandeep, Amy, Jeff, Robin, Vince, and Wil Wheaton as Kim Evey and Sean Becker premiered ep 3 of The Guild Season 4. We were all wearing our squid hats, waiting to be introduced to 1,600 applauding fans. Kim didn’t want anyone to see us, so we had to hide behind the door, and lean over to see giant screens broadcasting the show. I stood back and smiled at the sight of the cast huddled together, nervous to go on stage, but excited to hear the laughter booming from the audience. The Codex/Fawkes painting appeared on screen, the crowd cheered, and Felicia turned to me, flashing a huge grin. She said, “YOU did that!” I’m still blushing…

SDCC fail #1: Of course, being on the panel was pretty cool, too! It was an interesting experience. There was so much energy in the room. I was there to answer questions about the design and execution of the season and music video. Needless to say, I didn’t talk much, cause who wants to talk to the production designer when you can talk to Felicia Day! I was just glad to be a part of it, to be included in the Guild family. My saddest moment of the con? Not grabbing my name card to have as a keepsake of the day. I mean, I was there and I don’t even believe I was there!!! I’m gonna need proof to convince others!

I didn’t walk away with a name card, but I was able to take these awesome pictures, so I have something fun to share!

And the painting I mentioned was a piece of art I did for this current season of the Guild. The episode it is featured in airs next Tuesday, but it screened at the panel Saturday. Zaboo commissions it to show Codex that he approves of her relationship with Fawkes. I’ll get into details about how and why it came to be what it is later, but I thought I would show it to everyone who hasn’t seen it yet!

It’s acrylic on canvas, and it started out looking like this:

If you haven’t seen the premiere of LEGEND OF NEIL SEASON 3, go check it out now! The dining room scene was shot in my studio, just days before I did the Guild painting. How's that for web video trivia!

SDCC highlight #2: Well, that was an unplanned but very appropriate segue! I was also lucky enough to production design THE LEGEND OF NEIL season 3, which went live today! Sandeep Parikh, creator, writer, and director of N3IL, asked me to come on board after we worked together on the Guild, in which he stars as Zaboo. He wanted to go big with the season, and man, did we go big! I’ve been waiting for months to talk with you about all of the crazy things we made for LON, and now I can. Well, at least a little at a time. I don’t want to give anything away since we are only on the first episode!

And that was probably the hardest part for Sandeep and the cast during the panel, too, as so many of the fan questions were centered around what might happen throughout the season. But everyone did a great job of being informative while still avoiding spoilers. Sandeep was very expressive about his feeling for the cast and crew, and how hard everyone worked on the show. He also gave me a shout out for designing this year’s LON shirt, featuring the FOG art I did for episode 2. Be sure to watch for it! And order a shirt!

SDCC fail #2: That kinda fuzzy, crappy quality you are seeing in these panel photos? Can you believe that these are the best of what I have!?! I just got a new camera, the day before comicon, and apparently, I have no clue how to use it yet! I could be lame and say there is something wrong with it, but I think that “something” would be me! Anyway, if anyone has any better pix from either panel, I would love to have them!

And just for prosperity, here’s a behind the scenes photo (in focus) of the Lyke-Lyke in progress. Notice once again that Marissa is color coordinated with her project! This strange creature made a surprise cameo at the panel, puppeteered by fellow Neil alum Bryan Fulk.

SDCC highlight #3: It’s always inspiring to see a new project get tons of attention, especially when the people involved are dear to you. I got to witness that this weekend as America Young had her first comicon signing ever, for her starring role in the new web series "1st edition". The teaser trailer screened at CELEBRATE THE WEB, and people were clamoring to meet her. Watch it here, and I guarantee you will want to meet her too!

SDCC fail #3: The only thing more tiring that comicon is the prep for comicon. Building and printing and packing and shipping…it feels like you will never be ready. And the whole time you delude yourself with the idea that the actual con will be fun and relaxing and give you the opportunity to catch up will all the people you know and admire in the industry.

If I had made a physical list of everyone I wanted/needed to meet with, I probably would have only been able to check off about 25% of it. But I would have amended it tenfold. Every corner I turned or room I entered had a dozen people I wanted to meet, and more shockingly, people I didn’t know who wanted to meet me! And even the briefest encounters change the clock, and before you know it, the con is over.

Bonnie Burton (@bonniegrrl)was the top of my list! She works for Lucasfilm, and has the most fascinating job I have ever heard of. I follow her on twitter and enjoy all the art she creates for Lucas. She is a huge Star Wars/Godzilla/sci-fi everything fan, and has crazy crafting skills. She wrote "The Star Wars Craft Book"

and "You Can Draw Star Wars"

, among others. I wanted to talk to her about some of my secret Star Wars craft projects, but alas, we never crossed paths! 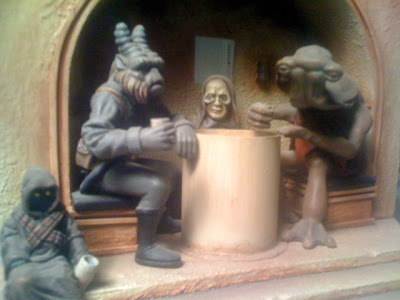 I guess the moral of the story is there is A LOT to do at San Diego Comicon! At first the concept of 5 days seems daunting, but it races by so quickly. I don’t know if I could have physically done a longer run, but I can say that I was not ready for it to end when it did!

More highlights and fails before the week is out…