I know everyone is watching the Oscars right now, but believe me when I tell you they pale in comparision to the fun that was had on stage last night, at the Hammer Don't Hurt'em Improv 2nd anniversary show! 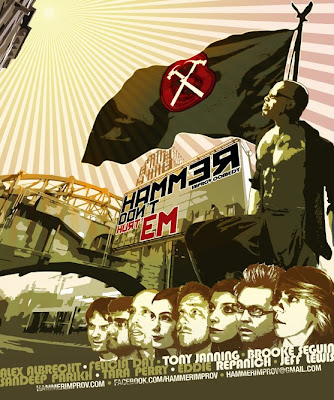 Hammer is a comedy improv group made up of Felicia Day, Alex Albrecht, Tony Janning, Sandeep Parikh, Brooke Seguin, Jeff Lewis, Tara Perry, and Eddie Repanich. Their usual shows consist of several acts, each revolving around improv games involving a play on words or scenerios provided by the audience. Last night's show was special, since it marks 2 years that the group has performed together. They were in a bigger venue, with a packed house, and had an opening act AND an intermission! 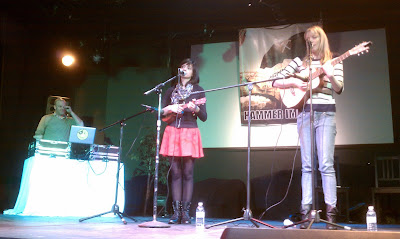 The night started with an amazing set by Garfunkle and Oates. These girls are hilarious, and their banter between songs was as funny as the songs themselves. Their new hit album is titled, "All Over Your Face", and you can get it at iTunes or Amazon. In celebration of the new songs, a fan threw plush sperm onto the stage. So the comedy was off to a good start. 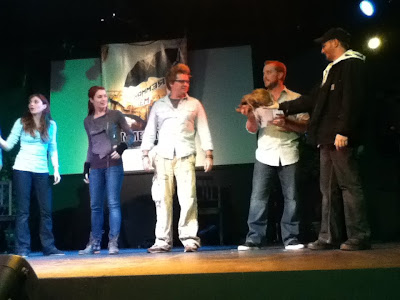 After the intermission, my favorite game was up. They call it, "Props with Greg Aronowitz", so, you can probably see why it appeals to me...
I've had the honor and the pleasure to work with all of these guys on various projects and shows, and they are all amazing performers. It's very flattering that they have pulled me out from behind the scenes to join in on the stage. 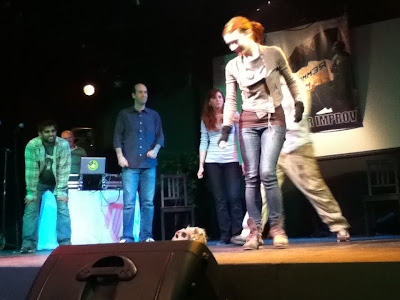 The first prop I brought out was an alien skull from my Sci-Fi feature, "Battle Planet". Felicia stepped up and transformed it into a strange pet that she commanded to "do it's business!" 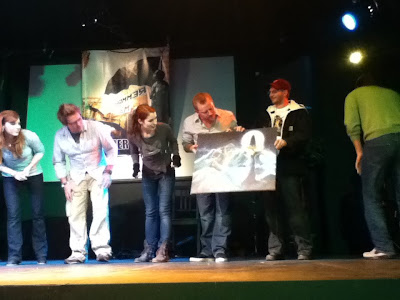 Next up was a painting I did for Matt Hawkin's Image comic, "Merlin", part of the "Lady Pendragon" series. I think this came as a surprise to the group, but it didn't take long for them to turn it into something hilarious. 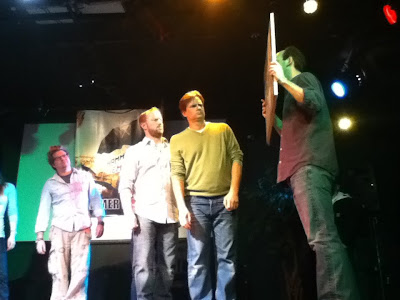 Jeff Lewis introduced himself as the class swimming instructor. 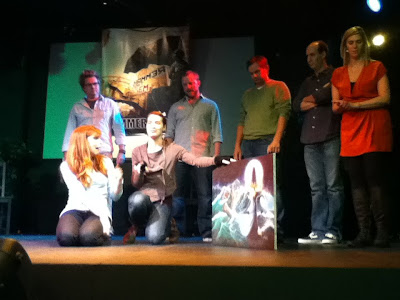 And Tara and Felicia used it as a computer screen to scrutinize a potential dating match... 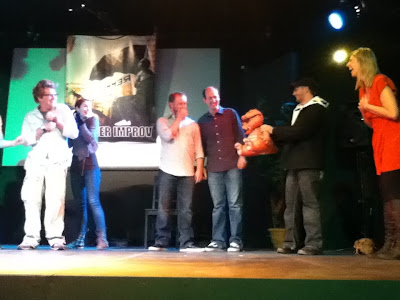 Everybody scrambled when I introduced Ralphie, my Dinosaurs Baby parody for Atom.com's "The Dan Levy Show". Coincidentally, he's from the same episode that Kate from Garfunkle and Oates parodies "Blossom". 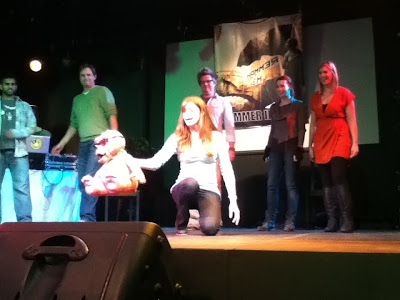 Tara fell in love with the little guy, and after the show, Brooke confessed that she almost grabbed him and ran off the stage. Turns out she's a huge Dinosaurs fan. I'll have to blog about my 4 years on the show for her sometime. Lots of crazy stories to tell. 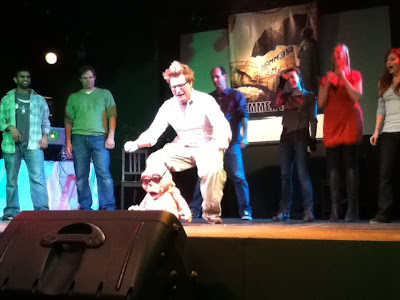 Alex stole the show though, when he and Ralphie potrayed E.T. and Elliot during the bicycle escape. 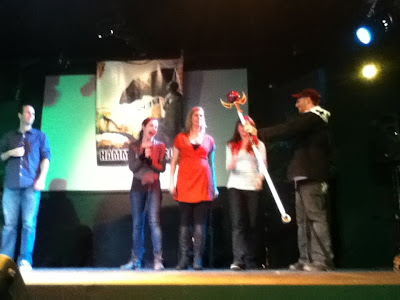 The biggest audience response for sure was when I presented the Codex staff. You might notice that it's purple instead of the usual green. That's because it was custom built for the greenscreen shoot during" The Guild Season 4". It had to be a different color, because anything green would get lost in the compositing process. So I chose purple, since it's my favorite color. 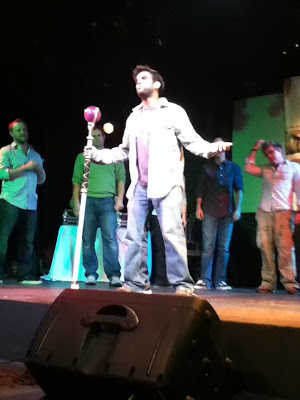 Sandeep didn't miss a beat in doing a caricature of Felicia as Codex. People were rolling in the aisles. 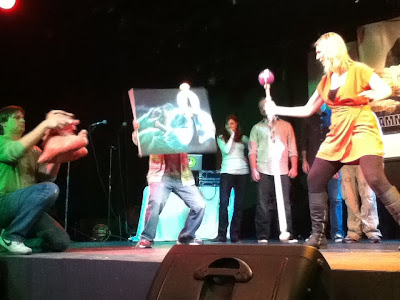 I love when someone starts a bit, and everyone jumps in with the rest of the props. 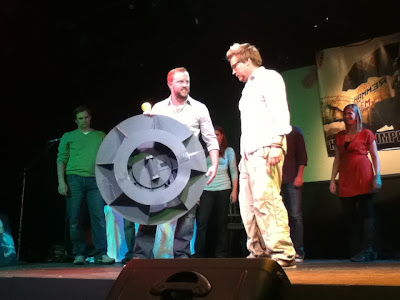 This piece isn't so much a prop as it is set dressing, but I thought it could inspire some comedy. Tony used it as a Star Gate dail. 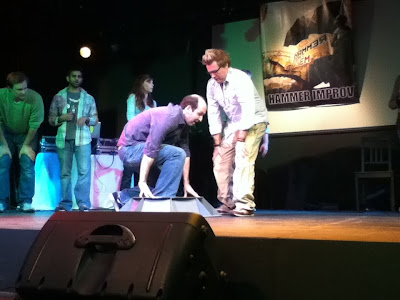 And we'll never know where Jeff was going with this bit! As he stepped into the dial, there was a loud snap! In fear of ruining the prop, they abandoned the sketch. No damage was done, but it proved to be a pretty funny moment anyway. I assured the guys that I wouldn't bring them anything that could be destroyed, so what ever happens next time, just go with it! 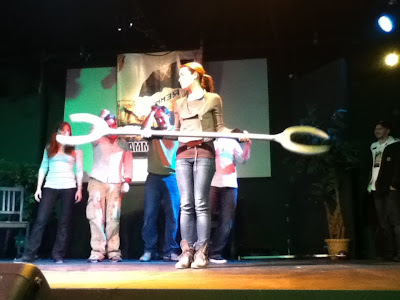 The last prop was a giant object that looks sort of like a crescent wrench. Or, at least Felicia thought so as she pronounced her troubles with assembling Ikea furniture. 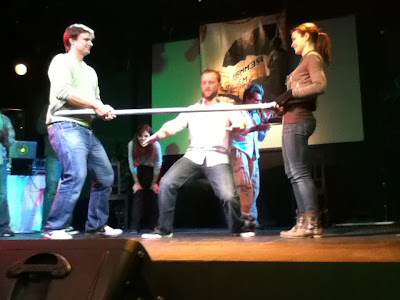 Eddie jumped in and turned it into a performance enhancing tool, but it didn't seem to please Felicia until Tony limboed under it! 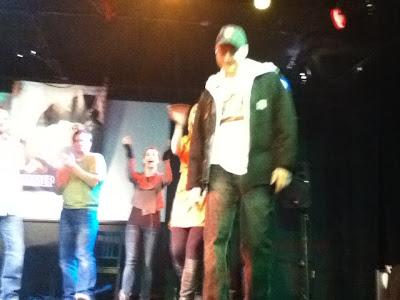 I had a few more surprises back stage, but we ran out of time. Oh, well, hopefully we'll get to do it again. And hopefully you can join us! Be sure to check out Hammer Improv on Facebook, and follow them on twitter (@hammerimprov) to find out about future shows.
Posted by Greg Aronowitz at 6:51 PM