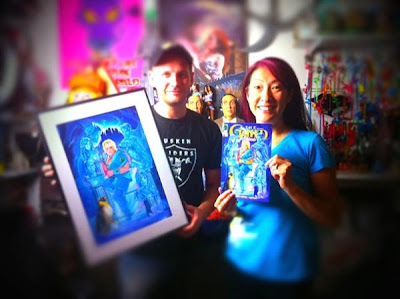 If you stop by your local comic shop today, be sure to add DarkHorse's THE GUILD: CLARA one-shot to your pull list!

After the enormous success of the Felicia Day penned THE GUILD mini-series, which focused on Codex and the forming of her guild, DarkHorse Comics announced that the origin story would continue with a follow up series of one-shots, each centering around a different member of THE GUILD.

The stories give us a peak into each guildie's past, showing what their lives were like before the adventures we witness in the live action web series THE GUILD. As if the characters weren't already rich enough on the show, Felicia piles on details as only she could to make every quirky, socially awkward panel bring the guild closer to your heart.

Even more amazingly, Felicia pulled in talents from the show to add a completely authentic layer to the creation of the comics. It is already very rare that you can enjoy a multi-media franchise where the all the material is actually produced by the creator of the property, but Felicia took it a step further and included GUILD cast and crew in the writing process. Jeff Lewis co-wrote the one shot for his character, Vork. GUILD director Sean Becker teamed up with Felicia to bring us Bladezz's rise to douchiness. And GUILD producer Kim Evey added her wild sense of humor to co-write the bizarre past of everyone's favorite ice mage/bad mom: Clara.

I had the honor of painting the alternate cover for the Clara one-shot. It was so fun to collaborate with Kim and Felicia once again, in a totally different art form. I hope THE GUILD comics keep running, I'd love to paint a few more of these!
Posted by Greg Aronowitz at 11:53 AM