I spent so many hours of my childhood, and most of my teenage years, huddled over my desk, under the dim glow of a single lamp, painstakingly painting tiny lead orcs, dragons, and knights for the weekly D&D gathering. It seemed that the role of laying out the dungeon, or plotting the storyline was always going to fall into the hands of the friend who had more rank, age, books, or muscle (even in nerd circles there is always the one friend who can punch the hardest and get their way) but no matter who I played with, I always got the task of doing the art.
My earliest experiences with model making centered around trying to build the Star Wars vehicles that were either unavailable at the time, or out of reach financially, and creating physical environments in which to act out our D&D quests. 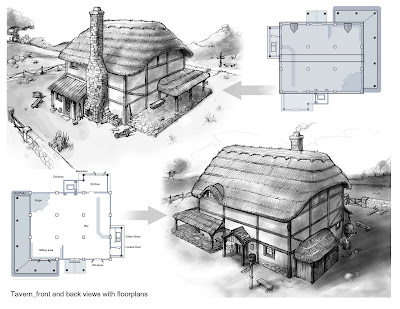 Photo 1: The caves, castles, and evil fortresses where always fun, but for some reason my favorite was always the Medieval Inn. It's a classic staple of fantasy lore, the modest thatched roof structure offering a moment of comfort, a warm meal, or shielding from the elements to a weary band of travelers. It is the perfect place for a brew, a brawl, or, most likely, both!
Needless to say, I was ecstatic to find that Felicia had written of such a place in Dragon Age: Redemption. And I was even more excited when BioWare provided this concept art, plucking the building right out of my imagination. 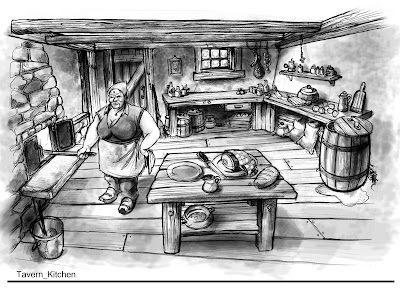 Photo 2: These were the only two images we received as reference for the inn, neither showing the actual interior we would film in. But I pulled from both drawings to create the final set.
Felicia dreamed big, but at all times we must remember that this was a web series. We made this show with all the professionalism of a major motion picture, or a network television series, but in all honesty, our budget probably wouldn't cover the daily Starbucks tab on a studio lot. There were so many conversations about the script and how to achieve it, where to cut corners, what seemed to ambitious. I had the full support of my art team when I continuously chose to argue on the side of NOT cutting elements, and the inn was a major one that kept being a possible contender for deletion.
Poor Felicia was constantly torn, knowing that it was a huge sequence to film, but also knowing that it really cemented the reality in this fantasy world she was bringing to life. We explored many avenues, such as finding a location, using sets from RenFaire, and filming on a greenscreen stage. But in the end, she was convinced to keep the episode script in tact, and had faith that I could build the set from scratch.
Photo 3: The first step was to figure out how much floor space the set would take up, and how to fill it while still leaving adequate room for the fight scene. I did some quick sketches on scrap paper with estimated dimensions, starting with a 30'x40' floor. Mazin took that info and did a simple SketchUp model, making this walk thru video so Felicia and the production team could get a sense of what a space that size would look like.
Photo 4: When everyone agreed that the layout felt right, Mazin went back in and added another layer of detail. Here is the same walk thru with more elements.

Photos 5-7: The next step was to take the 3D model and print gridded floor plans and elevations from sections of it. This allowed my carpenters to replicate the model in full size without massive amounts of blueprints. Each square of the grid above equals one foot. 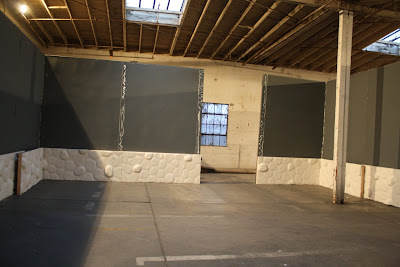 Photo 8: The basic structure of the inn was assembled from existing 10'x12' flats that I traded my friend Doug at 41 Sets for. It was a good deal, as that amount of walls can cost tens of thousands of dollars. We made the ponywall flats separately, and covered them in multiple layers of styrofoam sheet insulation, which was carved to look like stacked field stone. 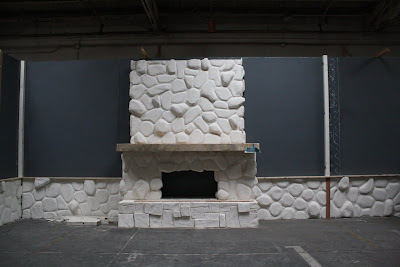 Photo 9: The fireplace was built in 4 sections: the hearth, the firebox, the mantle, and the chimney. They were all wood structures skinned with foam. The hearth was capped with 3/4' ply, since I was sure a stunt person would jump on it during the scene. I felt it was better safe than sorry! The fireplace was built at the BarnYard and trucked to the stage in pieces. 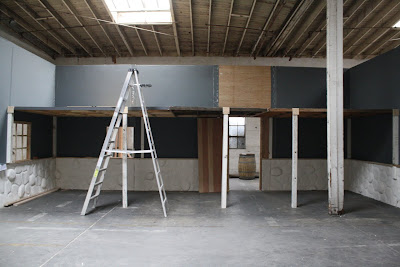 Photo 10: When all the walls were up, a temporary version of the back loft was erected to make sure that the proportions worked for the shots planned before diving into the expense of building the final, structural loft.
Notice the warehouse support column to the right. It wasn't that hard to blend it into the set, but it was difficult getting the set into a position where it fit on the stage AND the pole wasn't in a terrible place for the look of the inn. 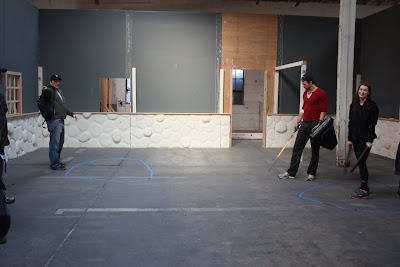 Photo 11: We started working alternate shifts, do more construction at night, so Felicia and the gang could come in and figure out how to utilize the space. Here, director Peter Winther works on the choreography with Tallis and Cairn. 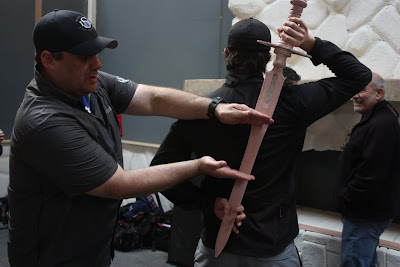 Photo 12: As the sets were being built on stage in downtown LA, the weapons, props, and makeup FX were moving along at the BarnYard. I was constantly running back and forth between both, and when I couldn't be at one, photos were taken to communicate. Here, Stunt Coordinator Thom Williams demonstrates his idea of how the Templar sword should be sheathed. Notice that lead stuntman Tim Eulich is holding a fiberglass stunt copy of sword. 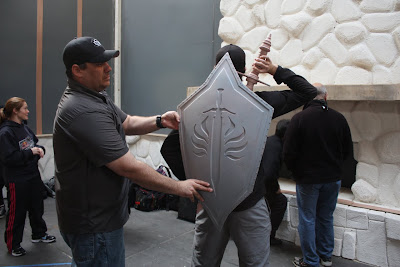 Photo 13: Thom chooses a position for the Templar shield to be stowed. 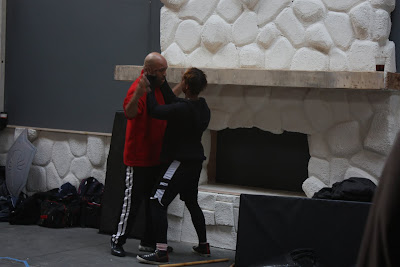 Photo 14: Nyree (Marcia Battise) can't take the waiting and decides to choke someone! 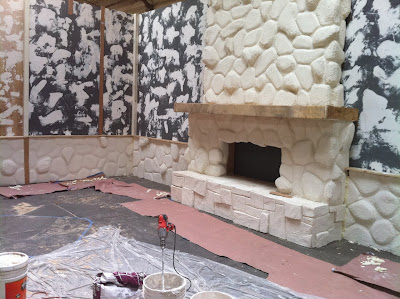 Photo 15: The stunt team left, and it was time to get back to work. Oh, I remember these late nights!!! I wanted the walls to have a muddy, stucco look, so thinned down joint compound was randomly, and roughly, slapped up on the walls. 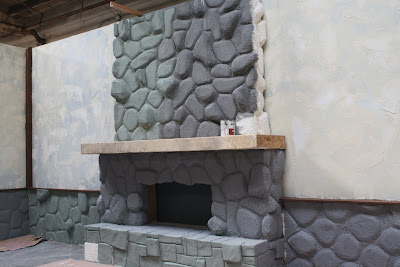 Photo 16: Then it was time for everything to get a base coat. The stone all went medium warm grey, and the walls a pale beige. 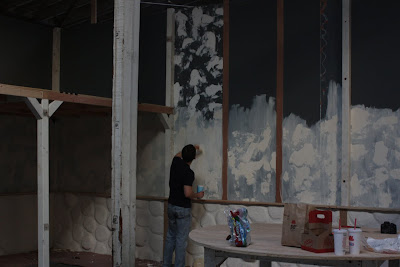 Photo 17: We didn't have enough tall ladders, so sometimes people did both steps of wall treatment as high as they could go, and then the rest would get done as the ladders became available! Here, Jason Swearingen does his best to reach the 8' mark! 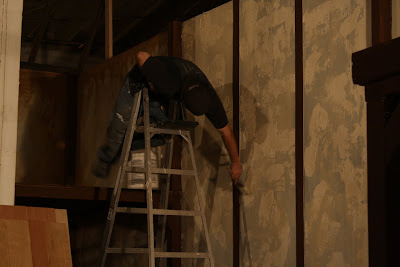 Photo 18: Quite the opposite, Frank Bonanno finished the wall by hanging off the ladder! 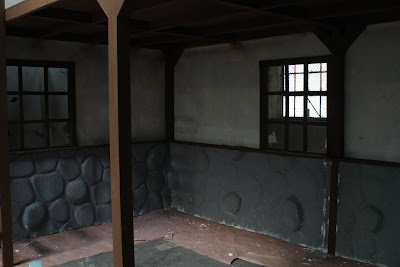 Photo 19: Here, the next step of painting the wood trim has been finished. With everything base coated, it's time for scenicing. 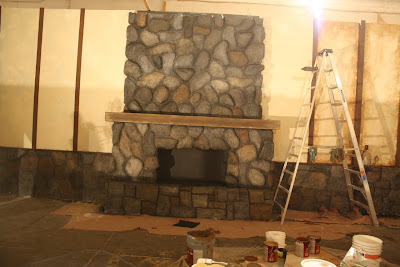 Photo 20: Multiple washes are applied to all the stones, using different color combos to separate them individually from the carved styrofoam sheet. A burnt sienna wash is sprayed around all the edges of the wall, then wiped down with damp rags to simulate age and water stains. 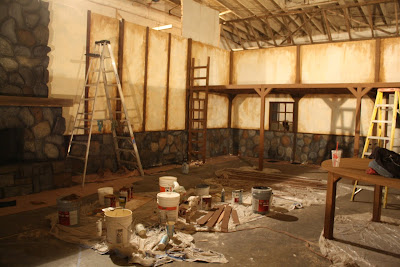 Photo 21: This was probably the longest task of the entire inn building process, but it was worth it for the amount of realism it added. We used several hundred rags to accomplish it! 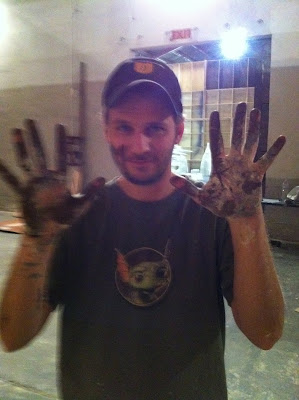 Photo 22: Not to mention the amount of paint I ended up wearing! 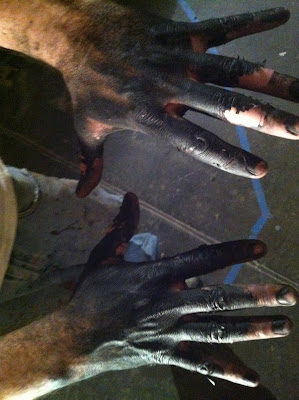 Photo 23: It took several nights to scenic the inn, and by the end of each I looked like I had severe frost bite! 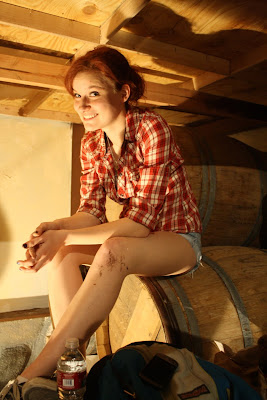 Photo 24: Even Red 5 couldn't escape getting covered in paint. Here, she takes a momentary break from painting under the second loft, which hung over the bar. Red sits on a stack of barrels, which are placed exactly were they were in the CG concept model! 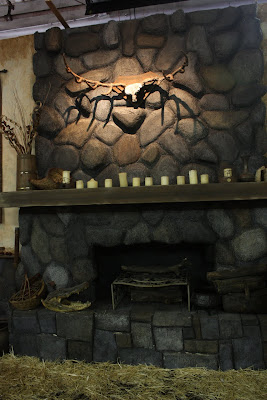 Photo 25: We finally finished painting, and then the fun part started: Dressing the set! All the fancy construction in the world won't help a set if it isn't dressed properly. The items in a room are as informative, if not more so, than the architecture itself. If you compare this photo with photo 20, you can see how much more alive the fireplace seems with the addition of candles, fire irons, and trophies. One glance and you instantly understand that you are in a huntsman's lodge. 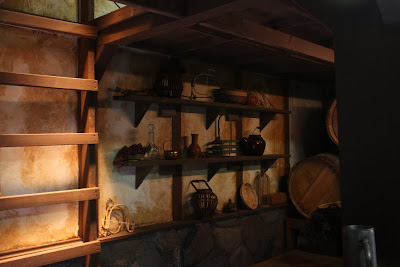 Photo 26: Across from the fireplace, I tried to add a "homey" touch by adding shelves of earthware behind the bar. 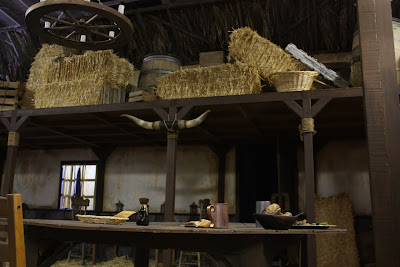 Photo 27: Chandeliers were hung from the warehouse's real rafters, and sections of thatched roof were added onto the back and side walls so the camera could look higher and wider. The thatch is actually fallen palm fronds from the trees in my yard!
The stage floor was concrete, and not very Medieval looking. We weren't allowed to paint it, so my idea was to cover it in hay. I was surprised to find that hay was pretty cheap, being a city boy and all, so I got some extra bales to use as set dressing, Turns out it only took one or two bales to put a thick covering over the floor, so I had LOTS of extras for set dressing and props. Not sure why an inn would have that much hay in the loft, but it look cool and didn't feel out of place, so I went with it. 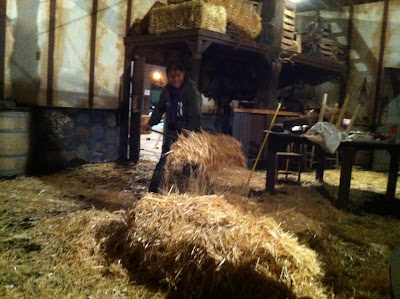 Photo 28: Can't say Art Department Coordinator Pooja Sharma was as excited about the hay as I was, especially after she shoveled hundreds of pounds of it across the floor. 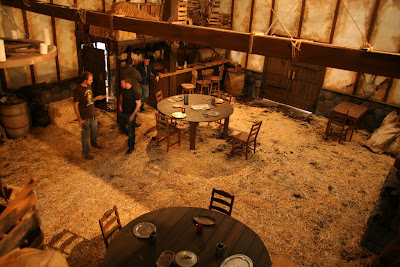 Photo 29: Here is what the inn looked like from up in the back loft. You can see the fake rafter I put through the middle of the set. It's actually a hollow "U" of luan suspened with rope from the building's real rafters. And look how far two bales of hay stretch! 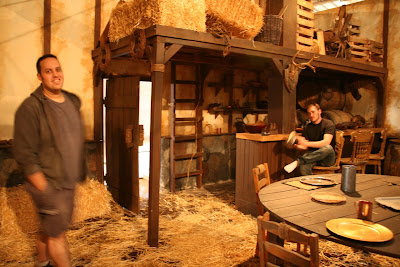 Photo 30: It did indeed get everywhere, though. Art Director Bryan Fulk found out pretty quick how easily hay gets into your shoes. Armorer Mazin Dazani thought it was pretty funny...wait! Mazin! What are you doing on the set! There are soooo many weapons to get ready for this scene!!!
Dragon Age: Redemption: Nyree is definitely my favorite episode so far, and this is without a doubt my favorite set. I feel like everyone has the same image in there mind when they think about a Tolkien-esqe fantasy inn, and I hope I came close to capturing it in real life. This set was a dream come true for me, and I felt like my 12 year old self playing the ultimate game of D&D the entire time we were working on it.
Anyone else out there more obsesed with painting the figures than actually playing the game? Or am I alone on that one!?!? Let me know in the comments below. And don't forget to like and/or share this blog!
More to come on DA:R...

Posted by Greg Aronowitz at 9:00 AM