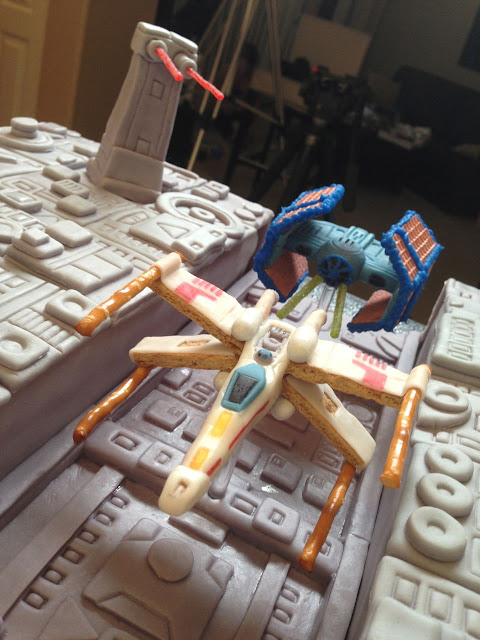 It was Red5's birthday this month, and I wanted to do something special. Baking was always a hobby of mine, but I thought it was time to step up my cake game and make a birthday cake that would be long remembered throughout the galaxy! I asked my friend Rosanna Pansino, creator of Nerdy Nummies, if she could give me some quick lessons on the use of fondant. I had never really worked with it before, and I knew it was the next step to elevating my baking skills. She invited me on her show, so my lesson turned into trial by fire! Watch below to see how it turned out! 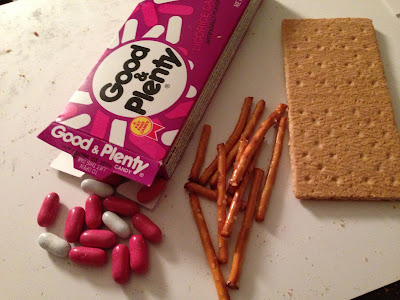 Photo 1: Ro and I didn't have time on the show to go over every single detail involved in making the Death Star Trench cake, so I thought I would write this post to cover some of the steps that I handled while she was baking the cakes!

I was in charge of putting together the spaceships for the dogfight in the trench. Being that this cake was for Red5, it was only natural that I included Luke Skywalker's x-wing. I wanted the ships to be edible along with the cake, so I gathered as many of my "model parts" as I could from the grocery store. The x-wing mainly consists of fondant, graham crackers, Good&Plenty, and pretzel sticks. 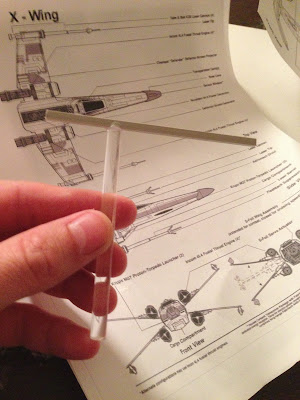 Photo 2: I tried using a pretzel stick as an armature for the x-wing, but the ship is so long and thin, the pretzel wouldn't support it. Particularly with the moisture of the fondant, and the pushing and poking I had to do to shape it. So I gave up on my "100% edible" concept, and justified this plastic armature by telling myself that lollipops and ice-cream bars have sticks in them! I used a piece of 1/4 clear acrylic rod as the "stem" so the final ship would appear to be flying over the surface of the cake. 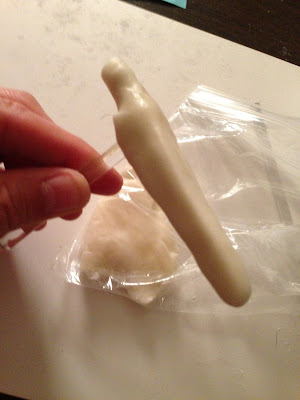 Photo 3: Then I softened up some fondant by working it in my hands, and wrapped the armature. It took a while to shape it, because fondant doesn't work like clay. I needed to let it sit and firm up for a while, shape it a little, then let it sit again. 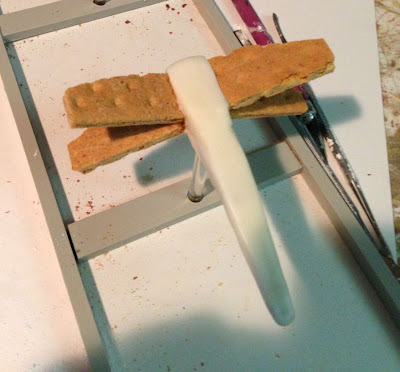 Photo 4: Once I had a shape I liked, I cut 4 wings from the graham cracker, and pressed them into the fondant body. I rolled a small coil of fondant and worked it between the wings with a small metal spatula to help keep the wings securely in place. 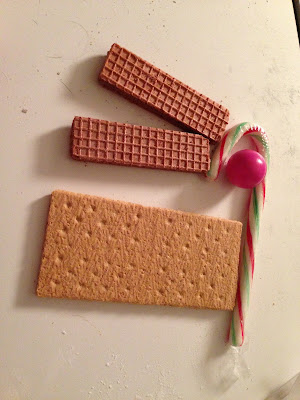 Photo 5: With the x-wing needing to firm up for a while, I shifted my attention to Darth Vader's TIE fighter. This ship was constructed from a gum ball Ro gave me off the set of Nerdy Nummies, a candy cane, several waffer cookies, and a graham cracker. 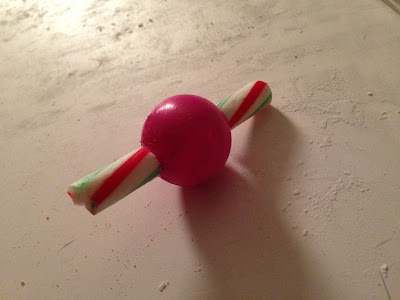 Photo 6: I drilled a hole through the gum ball and slipped a length of candy cane through it. This will be the cockpit and wing arms. 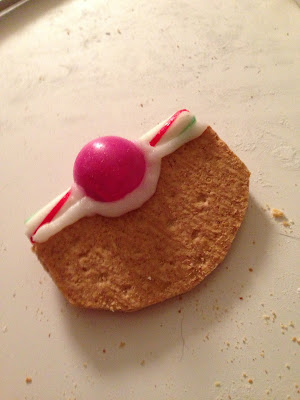 Photo 7: Then I cut out the engine housing from a graham cracker. I notched the front to fit around the gum ball, and cemented it to the candy using icing. 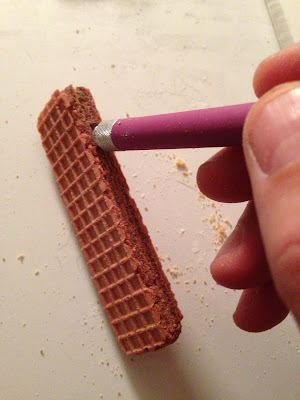 Photo 8: Vader's TIE fighter has very distinctive angled, louvered wings. One of my first ideas for this cake was to use chocolate waffer cookies to build those, since they have a similar shape and texture. And, you can eat them! The cookies were the perfect size for the scale I was using, but they were way to thick. So I used an xacto knife to split them in half. 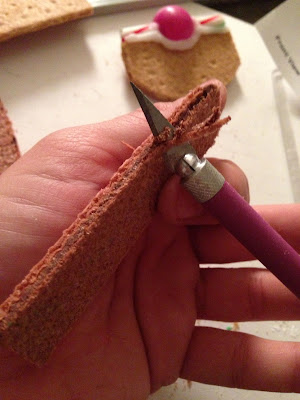 Photo 9: Then I used the xacto to shave off a 45 degree angle where the top and bottom cookie would touch the center panel, er, cookie. 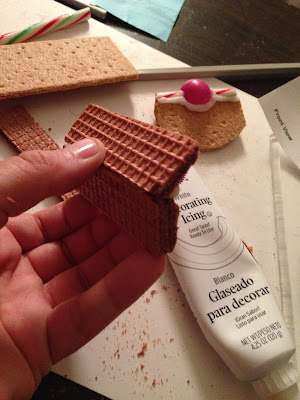 Photo 10: Using the same icing as earlier, I carefully placed a bead of it along the edge of the middle cookie, then placed the top cookie on at an angle. When the icing dried up a bit, and held the cookies together, I flipped it over and did the bottom cookie. This whole process was repeated for the other side, and when they were fully dry, I carefully cut the corners off to make the wings their proper shape. 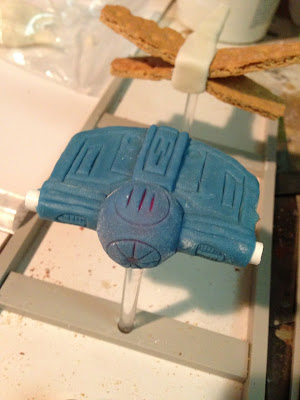 Photo 11: While the wings set, I mixed some grey-blue fondant, rolled it into a thin sheet, and carefully covered the entire body of the TIE fighter. I used my metal spatula to press in detail lines. 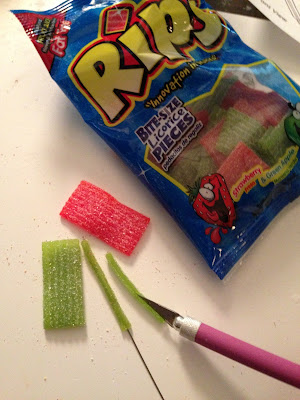 Photo 12: While the TIE fondant firmed up, I made some lasers by cutting a slit in a few sour gummy strips, and placing a thin piece of wire into them. 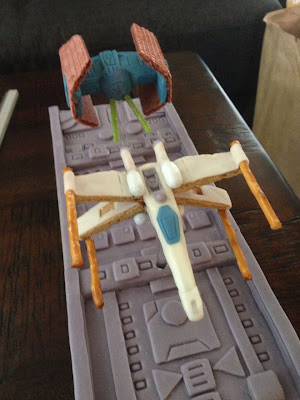 Photo 13: Now we are into final assembly. The waffer wings are secured onto the body of the TIE fighter with fondant. The wings of the x-wing get a thin layer of white fondant. I used a small piece of the TIE fighter blue fondant to sculpt the x-wing cockpit, and a small piece of the gray we made for the Death Star surface to make R2-D2 and the rear details. I attached pretzel sticks to the tips of the wings with icing, and I wrapped shortened pretzel sticks in fondant to be the thrusters. The engines are simply white Good & Plenties. I pushed the wire of the lasers into the gum ball so Vader would be taking a shot at Luke. 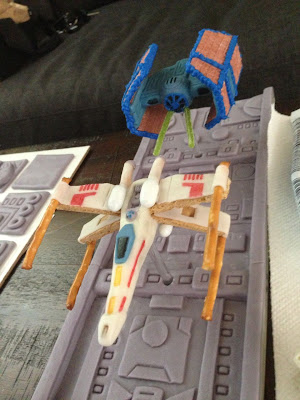 Photo 14: The final detailing for the ships consisted of Ro's edible magic markers for stripes on the x-wing, and blue icing piped on the wings of the TIE fighter. 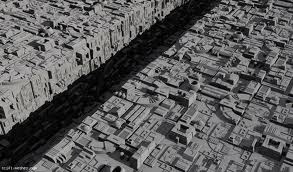 Photo 15: Everyone in the galaxy if familiar with the intimidating surface of the Death Star, but now you can think of it as a delightful treat! 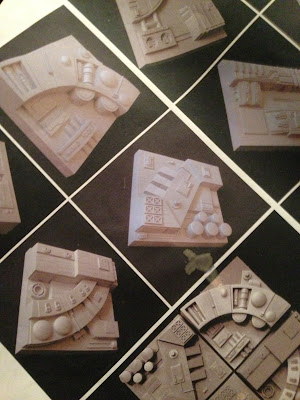 Photo 16: I pulled images of the individual Death Star tiles from the interwebs, and used them as patterns to craft the numerous fondant tiles for the cake. 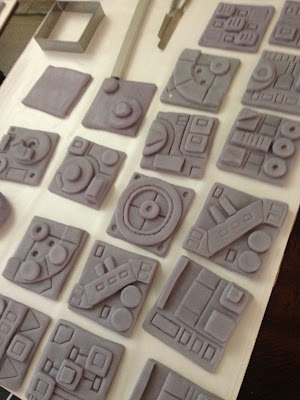 Photo 17: Ro and I set up an assembly line to make all the tiles. She cut out tons of shapes using these awesome multi-sized geometric cookie cutters she had, and I stacked up the piece in different patterns resembling the reference. 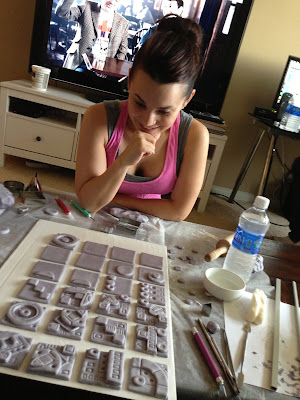 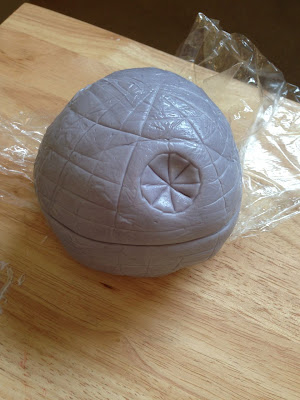 Photo 19: This cake involved a lot of fondant! We had to mix the gray to get it to be the right shade for the Death Star by adding small amounts of black to the white fondant. Then it had to be worked a ton to get it all mixed evenly. I may have worked this batch too much! 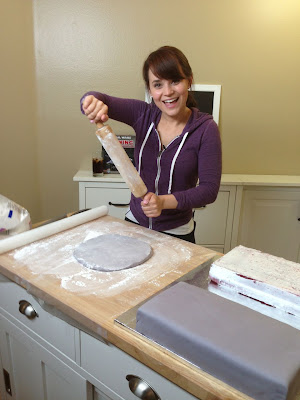 Photo 20: When the fondant was the perfect color, Ro rolled it out and draped it over the cake. She is such a pro! It went on so smooth, the cake literally looked like metal. I had seen it done before on shows and stuff, but never in person. On the second cake, she had me do it! I was so nervous about messing it up after all that work baking! She is an excellent teacher, so I got it right the first time. But not without my fair share of freaking out! Luckily, that part was cut out! 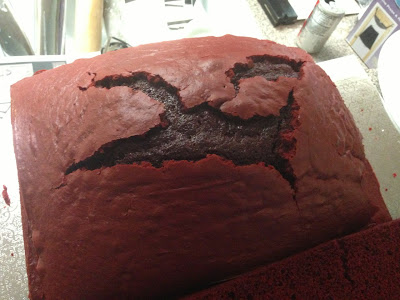 Photo 21: There are lots of things you guys don't get to see in the final edit of the show. Like how the top of the cake, which was cut off to level the final cake out, looked like a deranged Minecraft creeper! It looks a little weird, but was it ever tasty! You may wonder how everyone involved in Nerdy Nummies doesn't constantly want to eat EVERYTHING on the show... 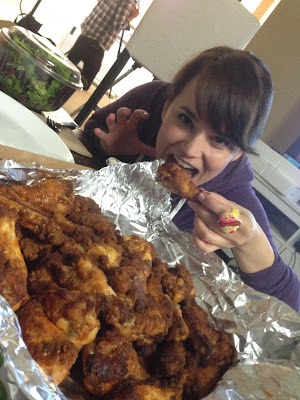 Photo 22: It's simple! Ro just keeps a huge supply of chicken wings around so no one has room for dessert! 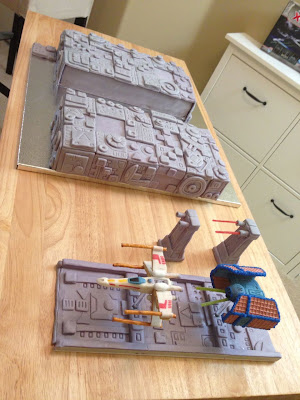 Photo 23: As you saw in the video, we adhered the finished tiles to the body of the cake, and it was ready for the party! 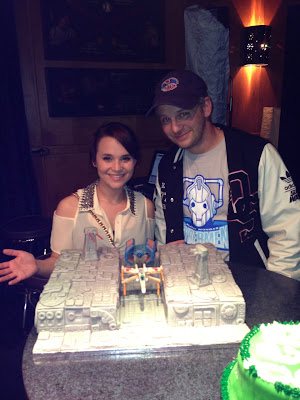 Photo 24: The cake made it safely to San Diego, and while everyone was out on the dance floor at Felicia Day's Geek & Sundry party, Ro and I snuck back to the greenroom to do the final assembly of the cake. We slid the ships into the trench, secured the laser towers, and adhered all the additional base tiles. 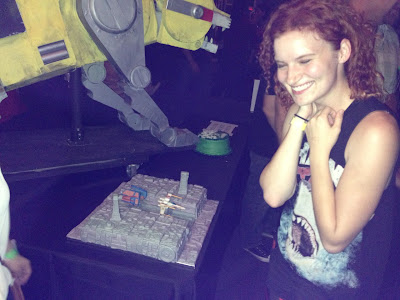 Photo 25: Then we pulled Red5 off the dance floor to surprise her. All her friends were there, including the Yellow Lion from Voltron! 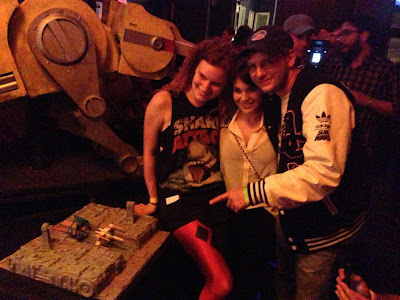 Photo 26: Happy Birthday, again, Red5! May the force be with you always! And thank you Rosanna, for the lessons, the extraordinarily generous amount of help, for having me on your show, and for being an awesome friend!
Posted by Greg Aronowitz at 7:30 PM