Where to start. 10,000 photos. 400 hours of video. 80 million stories to tell! All right, that last part is an exaggeration. But I’m sure if you put all of Space Patrol Delta cast and crew back in a room, we would come pretty close to a number like that in terms of crazy stories. Question is, which ones can I tell you…?

It’s been a while, but SPD is still a daily part of my life. I made so many great friends on the show, it’s hard to not think of them as family. And the fans! Ranger Board, Ranger Cast, and now Twitter, I am asked questions or getting comments on SPD everyday. So it seemed like a good idea to blog about some of the stuff that happened behind the scenes of the coolest PR season ever. Can I say that? I think so…

I’m working on another project right now that shall not be named. Hopefully I won’t get in trouble for publicizing even that much! Those studios, they’re everywhere! But I didn’t want my blog to go cold so soon after I started. This will probably happen a lot. Hollywood is so secretive. I hope you don’t mind random retro blogging. Trouble is for me, how do I present this mass amount of past info? I think I would have to make a career out of laying it out in chronological order. Maybe someday, I’ll write a book about it in that exact way. But not tonight! I guess the easiest way would be to do it in parts, each related to a specific element of SPD.

Even though I had written and directed for television before, SPD was my first Executive Producer gig. I was brought on to “expand the vision” of the show, and bring a new and fresh element to the PR franchise. My background was in Special FX and Production Design. I don’t know why I am capitalizing those titles, but I guess it makes them look more Important.

I wanted the futuristic Earth of 2025 (yes, 2025!!!!) to be coherent, the environments and the characters all feeling grounded, interactive with each other. The storyline we came up with made Earth a safe haven for aliens, much as the US was to immigrants back when the Statue of liberty was more than a tourist attraction. So it was important to me that there were actually ALIENS in the show, which always seems to be the first thing cut out of any sci-fi TV!

One of the first concerns the studio had was the Ranger’s sensei. The Sentai version of Doggie was very muppet like. Actually more Mascot like. He was bright blue fun fur, and in one episode, I think his eyes blinked. Don’t get me wrong, he was very cool, but it just wouldn’t fly in the US market. Japan is so much more open to fun interpretation. Here, everything has to look “real”. Like teletubbies……?

So that’s where I started my journey. Commander Cruger. I tried to honor the Sentai concept, but bring in a little more realism. As real as a 7 foot blue talking dog could be, I suppose… 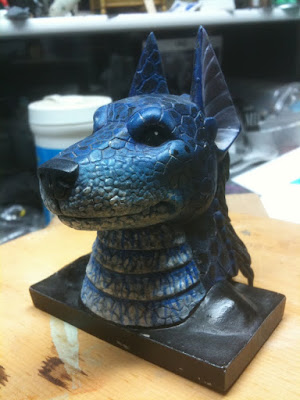 Photo 1: I did a quick maquette first to show the shape, textures, and color scheme I had in mind. Don’t ask me why, but alien dreads came to mind for him. I guess it was to have a hair-like element, since I eliminated the fur from the Deka version. I though scales would be more extra-terrestrial. Plus, realistic hair is difficult to maintain on animatronic creatures. I wanted to keep the doggie head as low maintenance as possible, since there was no “animatronic” team in the budget for the show. Strangely enough, the “dread” aesthetic seemed to follow throughout the show…

This was the first piece of art I presented to the studio, along with the Deka producers, and everybody liked it. So I was on my way. 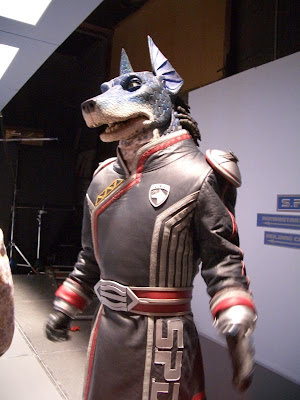 Photo #2: In the end, this is what the final Cruger suit looked like. But you know that! You’ve seen the show! If you haven’t, go check it out. Otherwise, this will be a very boring blog…

So, true SPD fans, please don’t hate me! I know this next topic is a bone of contention…my camera was lost on the first day of shooting in NZ, and I hadn’t downloaded my preproduction pix yet! So I lost almost everything I did in the states before I left! So I don’t actually have any Cruger building images. I do have, however, (this is the part where you cringe) Aisynia in the making! So bare with me, squint your eyes if you must and pretend that these next few photos are actually Cruger. The basic process was the same. Maybe I should have showed Labou in process and avoided some inevitable hate mail…! 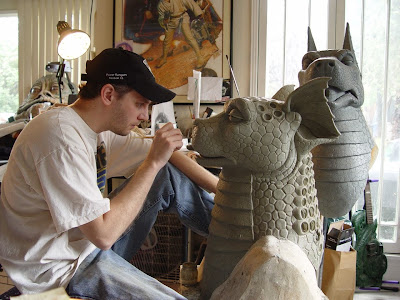 Photo #3: So here I am sculpting Aisynia. Look! In the background! It’s the Cruger sculpt! See, these photos aren’t so bad… I made Aisynia during the Christmas break, so I am back in the barnyard for this one. For budget reasons, we were only going to reference her in the finale. But I felt we had done so much build up about Cruger’s love for her, it would be cheating the audience to not show her. I convinced Bruce to write her in the last eps and I would scratch something together. Right decision? You be the judge. Just stop emailing me about it! 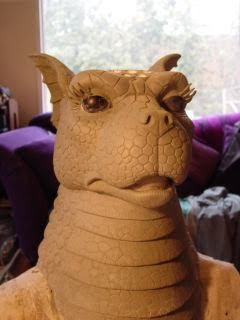 Photo #4: There she is in all her glory. You know you think she’s cute… 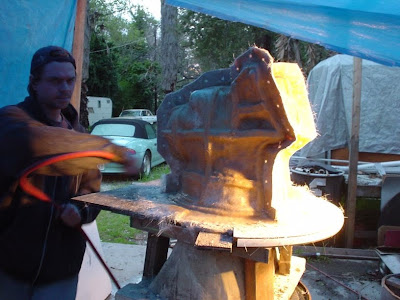 Photo #5: So, as I mentioned, this happened over the Christmas break. It doesn’t snow in LA, but it does rain like crazy in December. Not always, but definitely when I am trying to make a water sensitive polyester mold outside! Look at Scot’s face! He already hates Aisynia as much as you guys do!!! 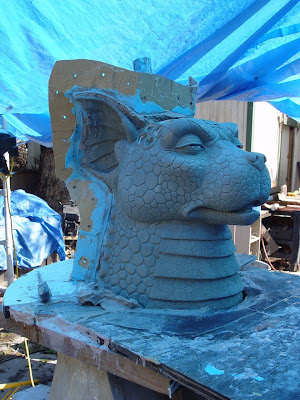 Photo #6: The next day. Less rainy. The fiberglass shell is removed and we are prepping to pour the silicone rubber. Her ears took some damage in the process, so more sculpting is in order. It’s too big to carry back inside. Man, was it cold out there! 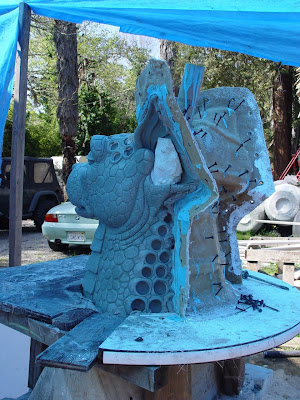 Photo #7: The back of the mold with the rubber poured in. The drywall screws are plugging vent holes drilled to help the rubber flow, and let air out of the sculpture’s detail. Details like the 237 dread plug holes I carved into her head and neck! Why do I keep doing that… 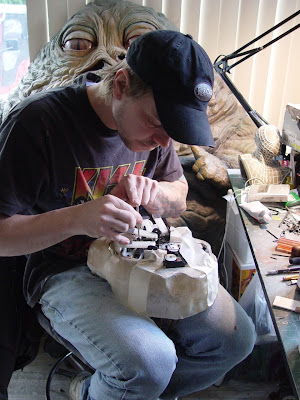 Photo #8: So there were a bunch more steps up to this photo, but I’m sure you are waiting for the pix of Violette in his underwear, and I don’t want to bore you with the technical stuff! Here we have the very talented and tattooed Scot Erb working on the animatronics for Aisynia. They were much more limited than Doggie’s. Scot came to NZ with me and helped lead Team Cruger to keep the commander functional. 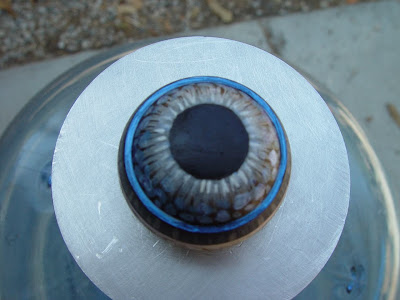 Photo #9: The next step (By the way, we are back to Cruger, so unclench those fists) was to make eyes. This photo is of the eye white with the hand painted pupil. The next step is to cover this piece with water clear dental acrylic. The end result is amazing, but the process only has a one in three success rate! So I had to hand paint 6 eye whites for every pair of Cruger eyes needed! Hmmm, anybody interested in reject Cruger eyes? I got a lot of them! 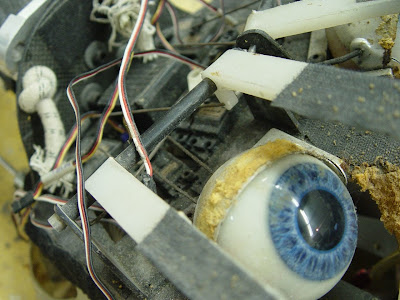 Photo #10: So this is a peek inside the more complicated Cruger animatronic head. Lots of wires! You can see the difference the clear acrylic makes on the final eyes. 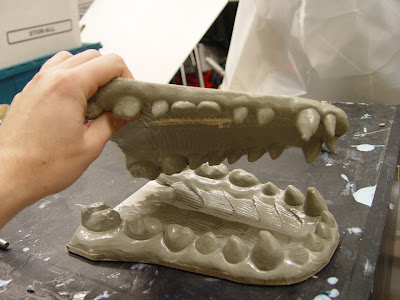 Photo #11: What’s a dog without teeth! Now that Cruger’s under skull is set, I can sculpt his K9 canines. Wow, typing in present tense. Lost in the moment there for a second… 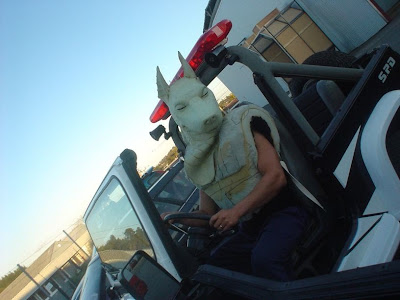 Photo #12: So a hop, skip, and a jump away (15 hour plane ride) and we are back in Kiwi land. Quick funny story, when I first got to NZ, I heard people calling each other Kiwi, and I thought it was a derogatory term! I guess we only have those here in America! One of the first things I had to do to prep for the shoot was fit actor John Tui with the Cruger head. We got it so he could see eye lines and walk. But could he drive!?! Here is the unpainted foam testing the limits. 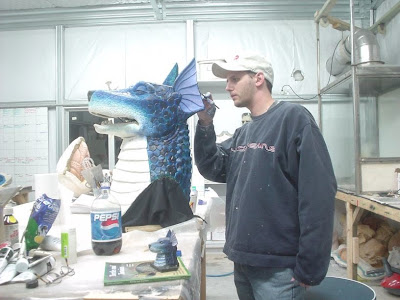 Photo #13: As if you never read this before on the BarnYard blog, but this picture was taken in the middle of the night, just hours before filming! Luckily, I had been living with this paint job in my mind for months. I had planned on making it slightly more layered, but you can’t actually get rubber cement in NZ! (Why rubber cement? See Zombie School blog ;) So I had to go with PAX paint and airbrush tattoo inks. I think he still looked cool. Wow, I miss Cruger… 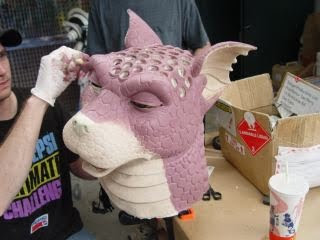 Photo #14: And just because I think its funny, here’s Aisynia being painted! Now you have a matching set! 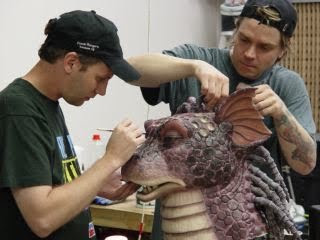 Photo #15: But wait! There’s more! Here is Cruger’s beloved wife getting her finishing touches. No? Really? C’mon! I tried! 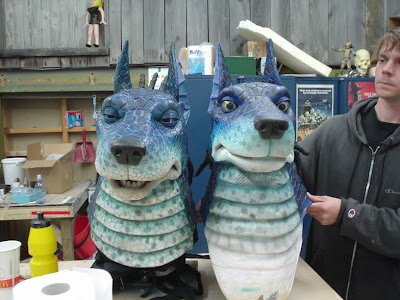 Photo #16: All right, to make it up to you, I’ll throw in a second Cruger! Here is the animatronic head with the stunt double. You can see the mesh where John’s eyes would be in the stunt head on the right. Freshly painted for the first day! They will never be this beautiful again! From the looks of the photo, the sun has come up, and Scot’s morale has gone down! Thanks for hangin’ in there with me buddy! 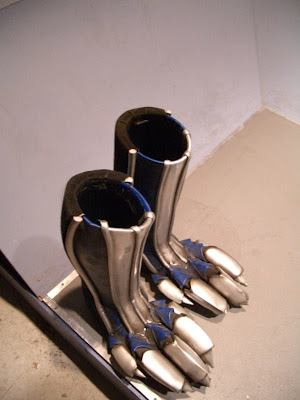 Photo #17: Something you don’t often see: Doggie’s paw boots, constructed by Mark in the Monster shop. 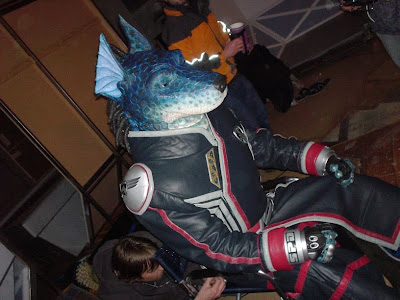 Photo #18: Here we are on the Command Center set for the first day of shooting Cruger. It could be just me, but it looks like John’s posture is saying, “I’m supposed to be an actor!! I didn’t sign up for this!” 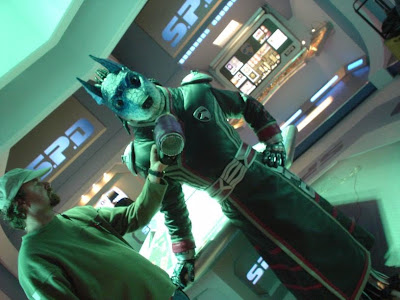 Photo #19: It takes a few minutes to pop the dog head on and off, which is more time than we have on a shooting day. So between shots, Team Cruger cools Tui off with a customized hairdryer through the muzzle! 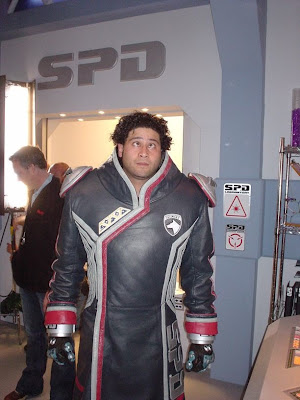 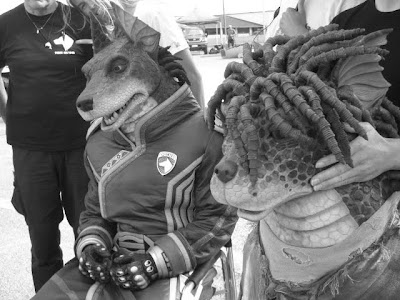 Photo #21: It was supposed to be a happy ending. But does that look like a man, er, dog who is happy to be reunited with his long lost love? I don’t think so. I wonder what could be on his mind…? 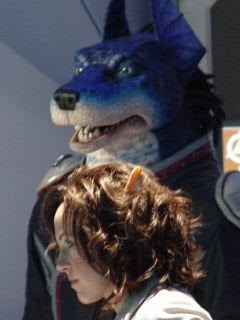 Photo #22: Oh, of course! You and me both, brother! Who wouldn’t be in love with Kat? A love triangle like that is sure to make anyone crazy… 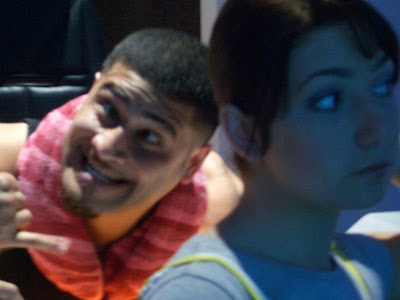 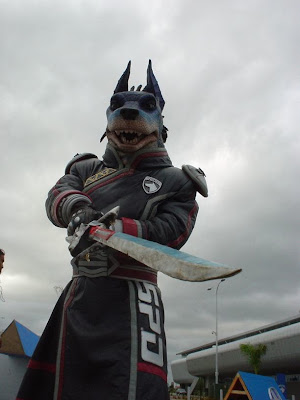 Photo #24: But in the end, Commander Anubis Cruger prevails! Do not mess with this dog! 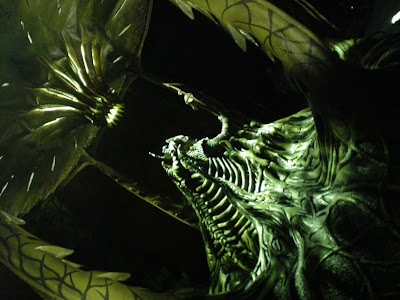 Up next: Someone who was willing to mess with that dog! Hope you enjoyed Part 1:SPD! Follow me at @gregaronowitz to get more info, and tweet me some feedback so I can make this blog work for you!